3 Best Practices to Multiply Major Gifts at Your Organization Roy Cheran is a guest contributor for Nonprofit Hub. Roy is the Vice President of Marketing at DonorPro, an innovative software company that helps nonprofits grow their fundraising revenue by an average of 37 percent each year. Roy has extensive experience consulting in higher education and leading fundraising efforts for military veteran causes. He is also a regular speaker at nonprofit technology conferences and a public voice for Veterans in the Pittsburgh area.
_____________

Major gifts don’t appear out of thin air. They aren’t delivered by a stork or the tooth fairy. Any fundraiser will tell you that acquiring major gifts is a true challenge. But, like most challenges, they’re worth it.

If you’re looking for help with major gifts, this article is for you.

Major giving best practices go beyond the three detailed below. Instead of overwhelming the post with countless items, the selection has been narrowed down to one best practice per stop in the donor pipeline:

For the sake of your nonprofit and your major giving candidates, get to know the prospects. Don’t rush the ask.

Major gift donor cultivation is a slow process—think golf, not basketball. It’s likely that you’ll have a few meetings, in person and on the phone, before you get around to the ask. You need to build a rapport with the prospect.

There are a variety of channels for you to cultivate your relationship with your prospects, such as:

Do what feels right in the given situation. Getting to know your prospects helps you customize and cater to them.

The likelihood of your ask being accepted increases as you personalize it. Stock language just won’t resonate.

Phase 2: Solicitation—Set Your Gift Goal and Ask for It

Unless you have a magic fundraising ability that no one else possesses, you can’t secure a donation that you don’t ask for. It’s as simple as that.

Asking for a gift is one part of the process and obviously a pivotal moment, but asking for the right amount is also important.

You’ll have a general sense of this amount based on how you categorize your organization’s donor levels. There’s usually quite a bit of play within the levels, especially major giving. Since major gifts are your biggest gifts, you theoretically have no cap. You’ll have to use specific information on the donor to set the parameters of the ask.

Your decision on how much to ask for will be partly informed by all you learn in the cultivation stage:

Leverage your knowledge to make an educated decision about the ideal gift range to ask for. The best choices are data-driven and confirmed by instinct.

Once you have your number set, build your major gift proposal around it. When it’s time to make the ask, go for it with confidence. As long as you’re prepared for the various prospect responses, you’ll have gotten the most stressful part of the process out of the way.

Donor acknowledgment is the connective tissue between acquisition and retention. It bonds the two halves of the donor-nonprofit relationship and signifies the end of the transition from prospect to donor.

Take concerted steps to ensure that your major gift donors are aware of your gratitude and know that their donations had a big impact. You can:

Retention rests on stewardship. One major gift is excellent, but multiple major gifts change the future of your organization.

Acquisition is the hardest part, so once you’ve secured a large donation from a supporter, it’s up to your stewardship skills to keep that supporter engaged and involved.

You nonprofit’s stewardship can be a hindrance or a help. It’s up to you.

The current upward trend in charitable giving—individual donating has increased by 5.7%—indicates that there are now more opportunities for major gifts than ever. Use these best practices to make sure that your organization gets a piece of the growing pie. 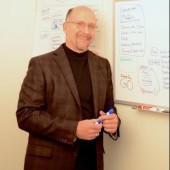 Fundraising, Children Rearing and How they Inform Your Nonprofit Marketing Practices 5 Communication Errors That Lose Donors–And How to Avoid Them