Indiana’s Wabash College flies under a lot of peoples’ radars. I should know, because I chose to attend there despite living 600 miles away in Nebraska. Wabash is small (901 students last year), all male (one of three such institutions left in the country), a traditional liberal arts school and the best decision I’ve ever made. Wabash knows how to leave a BIG impact, and can “school” other nonprofits on running a successful fundraising campaign.

Besides its rigorous academics, Wabash College stands out for its fiercely loyal and passionate students and alumni, the “Little Giants.” Alumni especially have always had a reputation for being generous to their alma mater, and we students often joke that this “Wabash mafia” will stop at nothing to take care of its own.

Long story short, Wabash students, alumni, faculty, family and friends, not only surpassed their goal, but they blew it out of the water six times over. By the end of 24 hours, Wabash had reached 2,329 gifts and raised over $465,421. They averaged 2 gifts per minute and $199.84 per gift. On top of this, 364 people, nearly the number of their original goal, were first-time donors. It was the largest single day of giving in the college’s 182-year history.

How did such a small school achieve such big results?

Steven Shattuck, VP of Marketing at Bloomerang says that the three keys to Wabash College’s success were social media integration, urgency and challenges. The social media buzz on Facebook and Twitter was also one of the biggest drivers. The #Wabash430 hashtag was trending in the Indianapolis area and snagged 694 unique mentions throughout the day. Likewise, the Wabash College Facebook page reported 13,000 views on 4/30.

Social media was just one component of the larger integrated strategy, however, as face-to-face and phone networking were both important for connecting with alums. The integrated nature of the campaign ensured that every single alumni class since 1948 contributed.

Urgency was key to keeping the momentum going. A “Day of Giving” that asks you to give today instead of hoping in vain for a donation someday built up excitement, urgency and ultimately overall participation.

Challenges added to the mix in integral and innovative ways. Throughout the day as benchmarks and goals were met, Wabash set and announced new ones. Likewise, individuals could challenge each other, not only through social media, but also through “Affinity Challenges” built into the donation process itself.

There were several other factors that contributed to Wabash College’s success, factors that primed the 4/30 initiative for success even before it launched that your organization can use for its next giving campaign.

It’s often taken for granted, but having a focused mission is extremely important, not only for the donor, but for you. Wabash College knows that it isn’t fundraising for an institution, it’s fundraising for a cause. Their cause is a traditional, well-rounded liberal arts education for men.

Only by being comfortable with how you define yourself and your cause can you sell that experience. It’s a long-term strategy, not a tactic. But by maintaining and illustrating the experience, Wabash could better fundraise when the time came.

The next thing the college’s fundraising campaign possessed that your organization should strive for is stellar organization. Wabash was able to pull together several batches of alumni, “lead challenge donors.” Each group pledged $43,000 for their initial benchmarks. When they passed one benchmark they were able to quickly announce the next and have those donors ready to go.

Likewise, they prepped a special group of 175 influential alumni and student “ambassadors” to tap their social media and other communication networks to spread the word quickly and with a bang.

Lastly, for as much planning as they put into the 4/30 campaign, spontaneity was crucial. Too much preselling can often turn donors off from a project, so Wabash sent out only one email the day before the campaign promising, “Tomorrow is a very big day for Wabash College! Check your email in the morning for a message from President Gregory Hess.” Besides that email and some example texts, tweets and posts they sent to their ambassadors in the days leading up, all of their content was written the day of.

During my past three years at Wabash working campus jobs in both the Annual Fund and Admissions offices I had seen my fair share of fundraising and knew it was the life-blood of a college like ours. I knew what the Wabash mission was all about and I knew that we could count on a tight network for support, but 4/30 still caught me by surprise. It was something spectacularly new, unique and refreshing. It convinced me, a usually tight-pocketed student that’s normally skeptical of my school’s fundraising initiatives, to send them a donation and spread the word on my own social media. The best part? I felt great doing it. 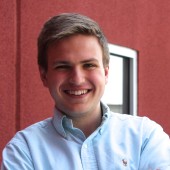