Drive Attention and Gain Donations on Facebook with Video Storytelling Nonprofits have a unique advantage on Facebook. Facebook is an environment where billions of people go to check in on what matters most to them and this includes the causes they’re most passionate about. Communicating your nonprofit’s message through video on Facebook will maximize your reach more than any other form of content and help you reach the people that are passionate about your cause. And it’s a lot easier than you might think.

We now live in a video-first world, in large part due to Mark Zuckerberg. During Facebook’s Q4 2016 earnings call, Zuckerberg himself said that he sees video “as a mega trend on the same order as mobile.” Our news feeds will have more and more video in them as this mega-trend continues.

Yet brands aren’t taking as much note as you’d think. Last summer, the social scheduling app Buffer did an extensive study of over 100,000 brands and 16,000,000 posts on Facebook. Their findings? That despite the fact that video was the highest performing form of content on Facebook, it was “largely underutilized” by brands across the board.

If the idea of starting to incorporate video regularly into your social media marketing strategy seems daunting, then this article is for you. I’ll go over some simple tips to keep in mind for creating high-performing videos for Facebook. The best part is you can create videos for Facebook with assets you already have.

Storytelling in a sound-off world

Did you know that Facebook is viewed mostly on mobile? 90% of Facebook users are accessing the platform on their mobile devices. And as such, most of them are watching their videos with sound-off. Due to the muted, auto-playing nature of Facebook videos (and nearly all social networks), videos must work with sound off.

Nonprofits have a leg up over other brands vying for attention on Facebook since every single nonprofit has a multitude of meaningful stories to tell. There is no need for them to manufacture a story to evoke emotion or educate. Stories have the capacity to captivate in a short amount of time, which is great since attention spans are short on social media.

The notion of storytelling might seem grandiose. Oftentimes though it’s as simple as honing in one campaign or project that your nonprofit is working on vs. trying to tell everything your nonprofit does in one video. Video works exceptionally well on Facebook, so you want to extrapolate as many stories you can and tell them in short (think 30 – 120 second long) videos that inspire action.

This video created by Animoto customer ShelterBox USA drove $3200 in donations with just a $100 Facebook video ad spend. Using a handful of photos and video clips shot entirely on a mobile phone, ShelterBox created a video days after the landslides hit Peru and Colombia in an effort to drive donations in the wake of the devastation. This 30-second video did not need an elaborate story to tell. Rather, it told the story of what just happened to families affected by this specific natural disaster and reminded ShelterBox Facebook fans that they can help by donating. This video works muted or with sound on.

Since so many videos on social media are consumed on mobile devices, ensuring your video is delivered in a format that’s unique to mobile is crucial. Square or vertical videos will, in most instances, outperform landscape videos on mobile.

Creating videos in a format that is unique to mobile is a quick way to get your video to perform better on social. Think about it, no one likes flipping their phone to the side in order to watch a video in fullscreen. Creating a square or vertical video allows the video to be watched without any maneuvering of the phone itself.

At Animoto, we ran an A/B test with the Jane Goodall Institute. One Facebook ad was created in a landscape format and the other was created with our newly released Square video format. The results were pretty astounding. With the same targeting and the same $100 spent for this A/B test, the square version got 2x the likes and 3x the shares.

Here are some things to keep in mind when creating video content for mobile viewers:

Communicate regularly with video and aim for share-worthiness

Video should be a language with which you become very fluent if Facebook is an important platform for you. Whether you use Facebook for ads in Ad Manager or to provide updates and news to your followers with posts on your page, you will amplify your message when you deliver it with video.

Developing a marketing strategy can seem daunting but take it one campaign at a time. Think about what message you want to be communicated on Facebook and then find a tool that makes it easy to create short, attention-grabbing videos to do so.

A new campaign you’re launching or a milestone you’re celebrating are great opportunities to tell your story with video. Highlighting who or what has benefited from the good works your nonprofit has done is always a great reminder to convey on Facebook. Is there anything in the news that is relevant for your nonprofit to comment on?

Create something that people will feel proud to share because it is aligned with how they view the world too. Video on Facebook is your opportunity to showcase how your nonprofit makes an impact. If you do so effectively, your fans will happily share your message on to their newsfeed.

Animoto’s award-winning online video builder makes it easy for anyone to create powerful and professional videos. Millions of consumers, businesses, marketers, and photographers around the world use Animoto to turn content they already have into videos that stand out in a video-first world. Founded in 2006, Animoto has offices in New York City and San Francisco. Connect with us and drive attention and gain donations on Facebook with video storytelling. 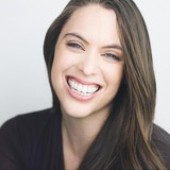 Becky Brooks is the Head of the Customer Owner department at Animoto, a popular online video builder service that specializes in helping small businesses and brands create more engaging social media videos. She has spoken at industry events around video marketing best practices and developed courses for Skillshare and CreativeLive on how to use Animoto to succeed with video marketing. She is also a producer of the online conference, The Social Video Marketing Summit. One Organization’s Quest for Good Moving from Print to Digital Communication: A Nonprofit Guide Why Nonprofits Shouldn’t Imitate the Art of Corporate Branding